Mizo women in a man-made society 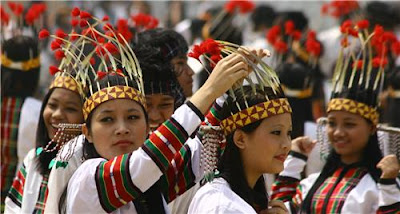 It is difficult to pinpoint with certainty when ‘modernization’ took place in Mizoram. But it may be surmised that ‘modern ideas’ and ‘modernization’ began to enter Mizoram during the first half of the 20th century due to the penetration of western ideas. Since then, some of the traditional beliefs and practices of the Mizos have been reconstructed according to the modern ideas. This paved the way for many progressive changes and gave a new multidimensional lease of life to the Mizo society. Of all these, the position of women is no doubt one of the most significant changes brought about by the influence of modernization in the Mizo society.

Christianity of course is the harbinger of ‘modernity’ vis-à-vis women’s liberation in Mizoram. The Christian missionaries therefore are regarded as a symbol of ‘modernization’ which led to the gradual changes in the conservative attitudes of men towards women. As such, women have made their way to the path of public sphere through Christianity for they can equally participate with men in some of the church affairs. Besides, Christian missionaries also brought education, which served as the main conduit for the inclusion of modern ideas to such an extent that it opened new doors for women to move outside the domestic sphere. Since 1950, women’s literacy rate has been on the rise and a number of women began to excel men in some professions. If we look at the present situation, with women making significant mark in many aspects of life, one of the Mizo proverbs has been reversed dramatically as ‘the wisdom of women has reached beyond the other side of the river’. The original saying ridicules women as it goes, ‘The wisdom of women does not even reach the other side of the river’

In spite of the above indications of progressive changes, the new social structure is yet far short from driving home a status of equality for women. Christianity and education indeed opened new doors for women to enter the public domain, but only in a limited way. Despite the increasing number of educated women, only few women hold important positions/portfolios in government jobs. All the political and village administrations are still controlled by men. In religious matters, in spite of the contributions they have made to the church, women are being excluded and are denied from ordination as pastors and elders. One of the Mizo women theologians once said, “Though we have zealously studied theology with a purpose of preaching the Gospels, I am sometimes hurt because men who got less marks than us in our degrees can go through ordination, while we cannot”. If men can be ordained as pastors and church elders, why can’t women? Instead of encouraging women many people however, still opine that those women, who have entered the public sphere are making bold and aggressive claims. This is mainly because, the mindset of current society confines women’s duties to the realms of the home and ‘regards household activities as the most important duties for them; whatever knowledge a woman may acquire from her education, she hardly claims any rewards unless she is proficient in the management of household duties first’. Women, therefore, themselves have largely accepted this attitude without question. Then for many women, ‘education meant only the acquisition of material skills in order to compete with men in the outside world and hence a loss of feminine virtues’. Thus, really not proving beneficial to their well being as opposition to established practices has led to a destabilization of their social security within their very own society.

There is no doubt about the positive impact of ‘Christianity’ and ‘modernity’; however the new social change is both complex and controversial. As modernization promotes new social outlooks and material cultures, the Mizo tradition has lost its hold in many areas of modern life. In recent times concerned members of the society therefore, have begun to defend some of the old practices and intend to revive traditional values and customs. In the context of new social discourses, the Mizo women therefore are often compelled to act as both the victims and guardians of the Mizo tradition. As one of most striking impacts of ‘modernity’ is on the attires of both the sexes; the Mizo traditional dresses have been gradually discarded. Here it can be asserted that Mizo women preserve the culture of the traditional dresses by wearing the Mizo Puan, though most of them have been designed to keep up with new modern trends. Especially where some important functions and ceremonies are concerned, women are still expected to wear only the Mizo Puan. Despite this, the society has often accused only women of setting aside traditional dresses, demanding them to maintain their chastity as well as traditional dresses by wearing Mizo Puan while men are not compelled to uphold the Mizo tradition through the very same act (as Puan is also the traditional men’s dress).

Besides this, the society also attempts to endorse the Mizo traditions through the observation of Customary Laws. With regard to marriage customs, the traditional practice of bride price is still prevalent and the price involved is nominal (a woman is worth only Rs 420). It is generally believed that the prestige of women can be upheld and protected by the way in which the practice of bride price is modified in accordance to the standards of present day life. This point of view has a greater stronghold among the women rather than men as many women’s activists have made demands to increase the price. Some might argue that the position of a Mizo woman is better off than women from other Indian societies where a woman has to pay a dowry as opposed to the bride price. However, it can be assumed that the practice of bride price has devalued a woman’s position and status in the society as it presupposes that she can be sold like an economic asset. In matters relating to the new reconstructed law of inheritance, only men are recognized as legitimate heirs and women do not legally have any rights in the family. This is due to the fact that modernity itself is a patriarchal construct and the changes it brought about are also deeply concerned with the affairs of men. As long as the male-biased customary law of inheritance exists, gender discrimination will exist in the society.

From the light of the above description it can be concluded by saying that ‘modernity reconstructed the structure of Mizo Society from male perspectives and the concept of women’s liberation is also considerably modified by the patriarchal norms of traditional society’. In short it can also be observed that in Mizoram, modernity brings development in material culture, but not complete changes in the conservative ideologies of men towards women. If we look at the present situation, the Mizo society appears to be seen as a ‘man-made society’ where women are subjected into it and live according to the will of men. Today as a result of a consciousness among educated women, questions and debates on women issues has gradually gained significance and has become an important subject. However, almost every issue has ended in mere discussions and the voices of women have been ignored. This might be because the society has not yet realized that his mother, wife, sisters, and daughters can become the victims of the prevailing social systems. Lastly to have a better and a more progressive society, it is significant to rethink the society’s attitudes on women and accept women’s voices as both the sexes have been sharing the work of building the society and its culture.

Impact of Insurgency On Mizo Women: Finding a Voice!

This site uses Akismet to reduce spam. Learn how your comment data is processed.